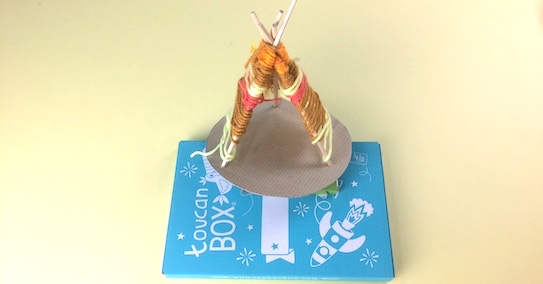 Learning about the Native American way of life offers a fascinating insight into a culture rich with traditions and attitudes that still impact our day-to-day living today. Examining Native American facts is exciting for kids:

How Native Americans lived off the land is a great way to teach children about where food and other amenities we take for granted come from. There’s always been a childhood fascination with the image of Native Americans, but regularly misappropriated, especially in the case of cowboys. Investigating the Native American people can help children have a more sensitive approach to understanding and interpreting different cultures and traditions.

So we’ve come up with some great Native American facts for kids, plus dreamed up a very cool craft from the toucanBox workshop: Making a mini play teepee, with just some cardboard, chopsticks and wool.

Who were the Native Americans?

The Native Americans were a people who were indigenous to the American continent, meaning they lived there before anyone else. There were tribes based across the mainland of the US, as well as Alaska and even Hawaii.

What is a tribe?

A tribe is a term used to describe a group of Native Americans. Native Americans who lived together identified themselves as a nation, and many would have unique religions, traditions, ways of living or identifiable features. Some more well-known tribes include the Comanche, Arapaho (who both lived on the Plains) and the Cherokee (who lived more towards the southeast of the country).

There are 562 recognised tribes in the United States.

How did Native Americans survive?

The Native Americans were hunter-gatherers. Everything they ate and built came from the land. They would gather seeds, beans and root vegetables, and hunt different animals. Many tribes relied on hunting buffalo as the buffalo would provide them with lots and lots of resources. They would use its meat for food, its skin for clothes and to build shelter, its bones for tools and weapons and even its horns as cups! Not to mention its poo made great fire fuel!

Why did they live in teepees?

Plains Indian tribes had to move across the land, usually following the path of buffalo or because of extreme changes in the weather. They had to be able to easily pack up their entire village and move on quickly. The teepee allowed them to do this. They were covered in animal skin, making them warm in winter but also nice and cool in the summer. Teepees were stable, and wouldn’t collapse in the strong Plains winds. When it was time to move on, the teepee would be folded away and transported easily.

What happened to the Native Americans?

We won’t get too gruesome, but in case the question comes up. The story goes that when Christopher Columbus landed in America, he thought he’d reached India. He called the indigenous people he met there Indians, and that name stuck for hundreds of years. However, historians now think that Columbus himself didn’t actually set foot on the American continent. Either way, the Europeans did, and they tried to take the land from the indigenous people, bringing forth many, many years of violence, oppression and slavery.

The Europeans spread across the country, taking control of land and forcing their way of life and religion on the Native Americans. War and fighting continued for a long time, where many lives were lost. Native Americans were eventually forced into reservations; areas of land where they had to live. But their freedom and way of life had been taken away.

A quick note about talking about Native American history with kids

While delving into Native American life we’re met with a complicated and not-very-child-friendly history, but it’s important to consider the thoughts and feelings of the Native American people, and especially how they might feel when their culture is misappropriated, such as dressing up and playing Cowboys and Indians. Instead we should be learning and celebrating, looking at their way of life with inquisitiveness and curiosity.

As part of our Cardboard Creations series, we came up with a great little craft activity that requires very few materials. Check out the full video below, plus full materials list and instructions to make your very own mini play tipi!

How to build a cosy Native American Teepee?

3 Break your wooden chopsticks in two and put one stick to one side; you’ll only need five. One by one, push a chopstick through the bottom of a hole.

4 Bring the tips of each chopstick together. Use a small piece of wool to make a knot around the ends of the chopsticks. Tie in place. 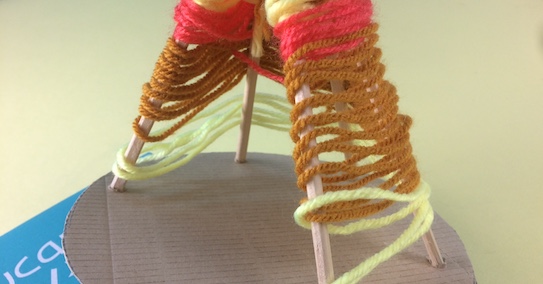 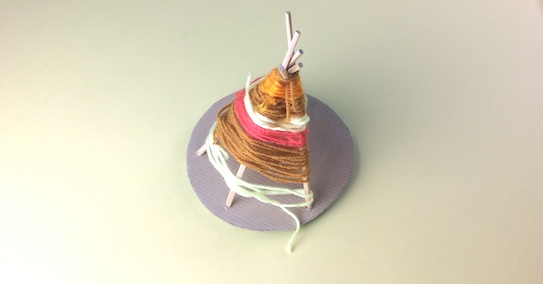 5 Keep on wrapping! Grab another length of wool (different colours give really cool patterns) and repeat step 4. As you move along, separate each strand to make the wool run all the way from the tip of the chopstick to the base of the teepee. Then you’re ready to play!