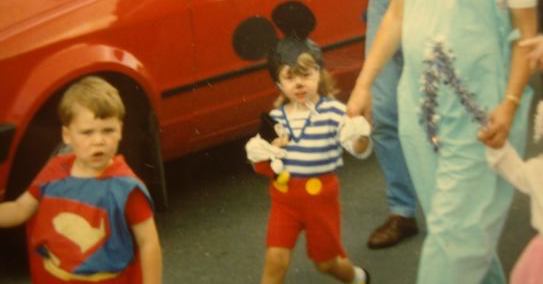 I love World Book Day. As a bit of a bookworm in my childhood, it was the best dressing up opportunity: becoming your favourite fictional character. It was broad enough that your worls book day costume idea could be almost anyone.

It turned out that all your favourite Disney characters were based on classic fairytales (or in the case of The Lion King, big Billy Shakespeare himself)! You want to dress up as your favourite superhero? No problem; they all existed in print before the blockbusters! Or, in my case, you want to realistically recreate Alexander Dumas’ iconic Three Musketeers by coercing your two best friends into wearing frilly shirts and tunics. That’s what all 10-year-olds want. Thankfully, I had great friends and an incredible mum who took costume-making for world book day very seriously.

There’s something really special about seeing what everyone dresses up as. In year 5 my teacher dressed up as Flat Stanley; a 2D boy who could post himself through letterboxes! You’d see what other kids were reading and the things that inspired them. The Twits would turn up to school with a whole host of other madcap Roald Dahl/Quentin Blake characters, including bald witches and giants with oversized snozzcumbers. Heroes and Hungry Caterpillars and Gruffalos all have lunch together.

When I was teaching in primary schools, World Book Day was just as fun. While I couldn’t completely condone a student turning up just in ripped purple trousers and painted head-to-toe in green paint, I appreciated the effort (even if he did have to resort to being Bruce Banner for the rest of the day).

But ultimately, as parents, coming up with costumes for World Book Day is a bit of a nightmare. Some requests can be pretty left field - “I want to be dressed up as Stick Man!” - and you’re not going to be able to pick up a cheap costume from a supermarket. And that’s assuming that kids’ costumes are cheap, which they’re not.

So we tapped our collective childhood to relieve our favourite world book day costumes and suggest some easy-to-assemble, affordable costumes of some classic book characters to dress up as this year. Read on to pick up some handy ideas, and coo over the toucanBox staff as kiddywinks. Awwww… 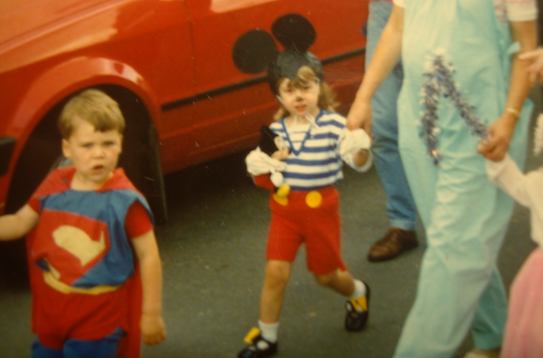 Is Mickey Mouse a book character? Well, he’s appeared in books and comic strips, I guess. The argument seemed less of an issue to our product designer extraordinaire Jenny, when she donned the famous ears. A pair of very 90s red shorts just need a couple of cardboard yellow buttons (note: post-millennium red shorts also work fine) and a quick crafting session of papier-mâché will get you a pretty accurate headpiece.

Then just add some white gloves, a little painted mouse nose and either a black t-shirt, or as Jen preferred, a nice stripy number. Mickey doesn’t wear shirts. You definitely should. 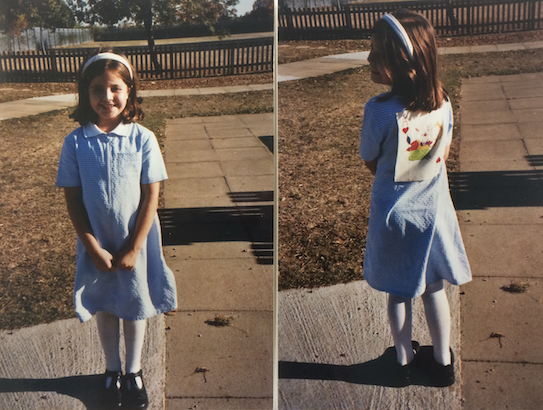 This one is easy. Really easy. Dani’s history of world book day costumes definitely favoured simplicity, but then - twist! - Dani’s mum added some artistic flair. Alice in Wonderland is completely iconic, thanks mostly to the Disney version. Combine a blue dress (as Dani shows, the classic school dress works perfectly) with some white tights and a matching headband, and little Alice is ready for her adventures.

You could add a little pinafore, but like I said, Dani’s mum had flair up her sleeve. She hand-painted the White Rabbit onto fabric and safety-pinned it to Dani’s back. So no one could mistake her for forgetting World Book Day and coming in dressed in her school uniform. Especially not from the back! 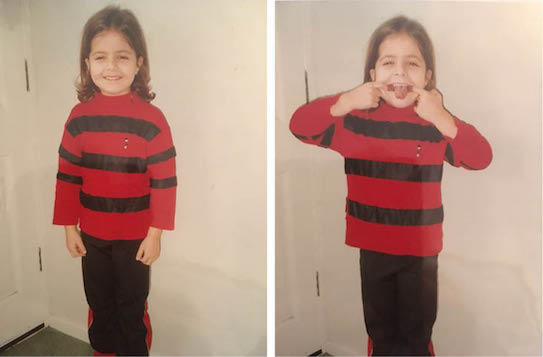 Dani again, champion of simplicity. Here she is dressed as none other than The Beano’s mischievous hero, Dennis The Menace! In later years Dennis has become significantly less menacing, but with that little face (s)he’s not fooling anyone. A stripy black and red t-shirt and black shorts. Punky hair optional. Super simple.

Dani’s just pointed out that the jumper isn’t in fact black and red striped. Her mum actually sewed black fabric strips onto a plain red jumper. Mums are incredible. 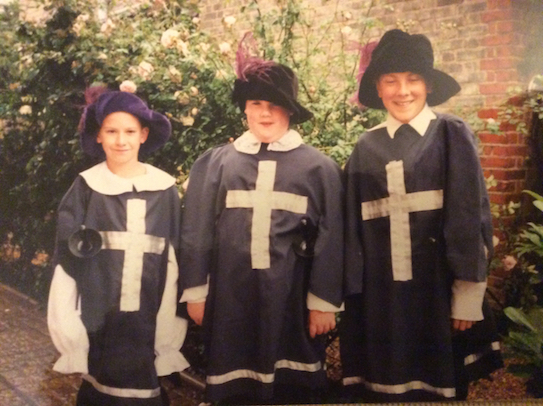 This is me as a 10-year old. I’m the one in the middle. I officially took the role of Porthos, the gentle giant whose eating abilities impress King Louis XIV. I think I made that choice of my own accord. For me as a 10-year old, a feathered hat, flouncy shirt and tunic was the epitome of cool. My friends didn’t completely agree, but went along with it.

For quick book day costumes for three kids, this idea started out with simplicity in mind. Feathered hats and plastic foil swords were optional (the former came from our dressing up box and charity shops, the latter from a toy store), and the tunic was to be made from an old pillow case. Any dark colour will do; just cut a head and some arm holes. But me and my mum’s attention to detail took over and, after watching a number of adaptations, we (she!) made them out of bedsheet fabric. Then spent a considerable amount of time perfecting the crucifix details. I asked for a sword holster - that’s where my mum drew the line. 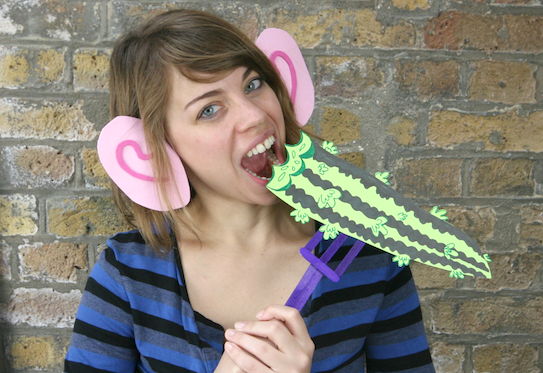 Ineke, one of our graphic designers, was a wee 30-year old when we asked her to review her favourite childhood book. She chose The BFG. Cue some very simple foam ears (you could use pink cardboard) and a snozzcumber on a lolly stick fork. Wear some old clothes that you can make look a little ragged and suddenly you’re the Big Friendly Giant himself!

Diary Of A Wimpy Kid costume

White t-shirt, black shorts, and a black school rucksack. Just remind your child to look pretty sad, despondent and a little bit terrified all day. It’s quite an important part of the costume.

Yes, it would have been easier in the 1990s. Bunch up that long flowing hair into plaited pigtails, add some mismatched socks and any other bright colours/denim will nicely complete the look.

Anyone from The Hobbit or Lord Of The Rings

Ideal situation: nine friends, al of different statures, and one ring. That’s not an easy costume, but it would be epically cool, right? How about an t-shirt and shorts, waistcoat and satchel for a very hobbit look. Made some hairy cardboard feet and stick them over your shoes! 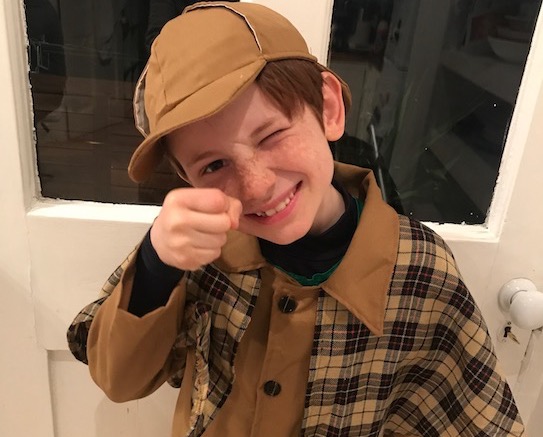 Alessio became a super sleuth last year and donned Sherlock Holmes’s famous deerstalker. The deerstalker is a must, but the rest you can just use your imagination!

White t-shirt under a dress, and a bow in the hair. Carry a couple of your favourite books along with you!

Why not create your very own world [book day bookmark]((https://www.toucanbox.com/activities/world-book-day-bookmark) or a superhero puzzle and colouring in. This will surely also work with unicorns and princesses.