15 Cheetah facts you need to know

If you’re mad about cheetahs, sprint into this treasure trove of cheetah facts. We’ve whittled 100 facts about cheetahs down to the top 15 facts. These fantastically fast felines live mainly in Africa but are finding it hard to outrun extinction. Read on to find out why they’re in trouble, whether they roar, how they wear running spikes and other interesting facts about cheetahs.

These super-cats hold the title of the world’s fastest land animal and can reach a top speed of 120km per hour in just 3 seconds! Their elongated, flexible spine and ultra-long legs let them take enormous strides. Watch Sarah the world’s fastest cheetah, sprint. 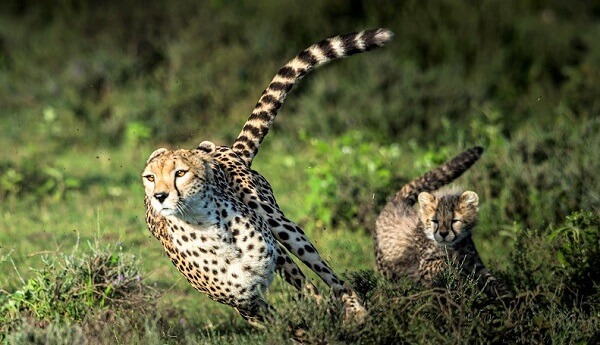 Most cats have soft, smooth paws, but the sole of a cheetah foot is tough, like the rubber on a tyre. It also has ‘semi non-retractable’ claws (so they always stick out a bit, like a dog’s). The claws grip the ground like a spike running shoe, allowing these speedy superstars to run and turn quickly without slipping.

3 What do they have in common with a ship?

These speedy superstars have a built-in rudder! They use their long, muscular tail like a rudder on a boat. It controls their steering and helps them keep their balance while they’re running at high speeds.

Cheetahs have tear marks that run from the inside corners of their eyes to the outer corners of their mouth. These dark lines offer sun glare protection by reflecting the rays of the strong African sun. These predators can stay focussed on their prey even in the brightest conditions. So, that’s why you won’t see a cheetah squinting into the sun! 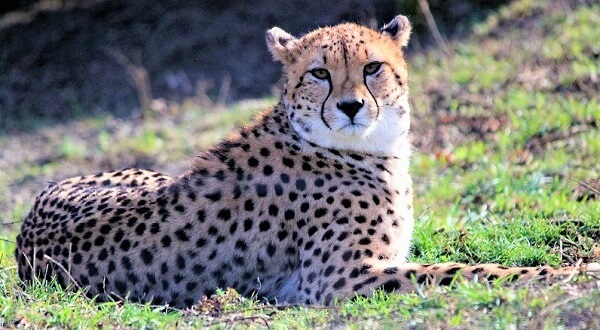 The name ‘cheetah’ comes from the Sanskrit word ‘chitraka’ and means ‘the spotted one’. Their golden fur is covered in around 2,000 solid black spots (leopards have rosette markings—don’t get the two confused!). Even cheetah skin has black spots. Scientists think these markings help camouflage them among the light and shadow of grasses.

6 Not just Africa is home

The savannah plains and open forests of sub-Saharan Africa are the habitat of the cheetah. Most people don’t know that there is a cheetah population in north-eastern Iran, although only a few dozen remain here. In Africa, Namibia has the largest number of wild cheetahs.

Cheetahs are carnivores and hunt animals on the African plains. On the menu are small buck like springboks and duiker. But these spotted cats also snack on rabbits, warthogs, and birds. Cheetahs usually hunt every two to four days. A female cheetah with cubs will hunt every day to feed her family.

Most big cats hunt at night, so cheetahs avoid the competition by hunting during the day. No-one wants to meet a hungry lion. They use their sharp vision to find prey and sometimes climb termite mounds to get a better view. When they spot something delicious, they chase it with lightning speed, knock it over and then suffocate it by squeezing its throat. 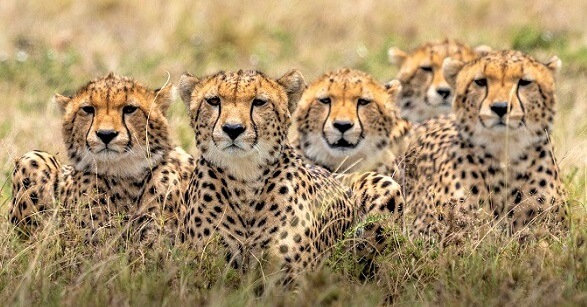 9 Cubs have funny, but useful, hairstyles

Cute cheetah cubs have mohawk hairstyles! A long, silvery strip of fur, called a mantle, runs down their back. This may help them stay warm and dry but is also useful in camouflaging them. Cheetah cubs actually look a bit like honey badgers. Some scientists believe they are trying to imitate this dangerous little animal to scare off predators. 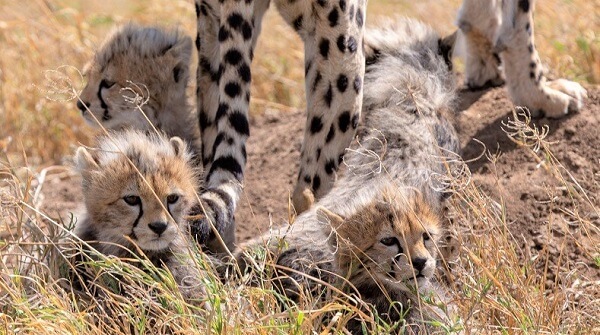 Lions are known for their grumbling roars, but cheetahs make less scary sounds. They meow, purr, and make chirps and ‘churring’ noises. Listen to chatty cheetahs at Toronto Zoo. Perfect purrers like house cats and cheetahs have a little bone in their throat called the ‘epihyal’ bone, which lets them purr. Lions have strong ligaments for roaring instead.

11 They don’t live in large groups

Cheetahs don’t form large prides like lions do. Cheetah brothers often hang out together, while the ladies are solitary (which means they are happiest alone). When greeting friends or family they behave like dogs and sniff, nuzzle, and lick each other.

12 How big are cheetahs?

Large and light is a good cheetah description. Cheetah bodies are between 1.1m and 1.4m metres long. The tail measures another 65 cm to 80 cm. Their weight ranges from 34 kg to 54 kg. A male lion weighs as much as three adult cheetahs! He wouldn’t have wanted to pick a fight with the biggest cheetah ever though! It lived around 2.2 million years ago and weighed 110 kg!

After a pregnancy of 93 days, females give birth to between two and eight cubs. The young are blind at birth, but within 10 days their eyes open. The first teeth appear at 3 weeks. The babies live with mum in a lair hidden by tall plants, until they are 16 to 24 months old. Why not build your own den or paint a cheetah?

14 How long do cheetahs they live?

Life in the wild is difficult and many adult and young cheetahs are killed by other predators. Wild cheetahs reach an average age of just 10 to 12 years. In captivity, cheetahs live much longer and often celebrate their twentieth birthday!

There were more than 100,000 cheetahs in 1900, but now there are fewer than 7,000 wild cheetahs. As humans take land for their cities and farms, cheetahs lose their homes—and often their lives.

Love African animals? Add the Giraffe Spy Periscope to your toucanBox. It comes with an educational magazine and sticker sheet, for just £5.95! Or explore our Safari Box here.