Discover 15 Fun Facts about Koalas for Kids and Adults alike

What’s grey, with a large head, no tail, fluffy ears, and a spoon-shaped nose? It’s the koala of course – Australia’s adored, eucalyptus-leaf loving teddy bear! But did you know that koalas aren’t in fact real bears? That’s just one of at least 100 fun facts about koalas. Here are our 15 top nuggets of koala information.

With their round ears and big black noses, koalas look like cute bears, but they’re actually marsupials. This means that their babies are born prematurely (very early) and not fully formed. Some marsupials, including koalas and kangaroos, have pouches on their tummies to safely carry their babies. Not all marsupials have pouches though!

Koalas are a national symbol of Australia, some other fun koala habitat facts include: In the wild, you’ll only find them along the coastlines of Queensland, New South Wales, South Australia, and Victoria. And you’ll have to crane your neck to see them! These furry critters are usually perched high up in the forks of eucalyptus tree branches. Koalas in the cooler southern regions are larger with thicker fur. Watch adorable koalas on this live webcam 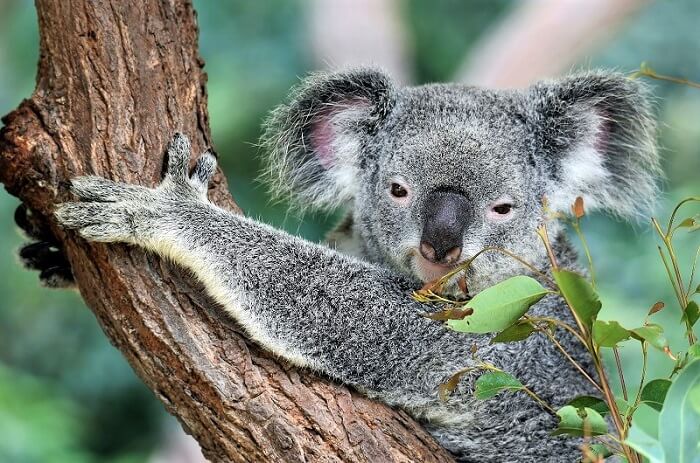 3 What do Koalas eat?

Eucalyptus leaves are poisonous to most animals, but koalas love them. It’s all they eat, and they can gobble up to a kilogram a day! Thanks to a special organ called a caecum, koalas can digest tough leaf fibres and detoxify the poisons. They can be picky eaters though. There are over 700 species of Eucalyptus but only 50 make it onto the koala menu.

4 Is it true that they don’t drink?

Like weird facts about koalas? “Koala” means “no drink” in an Australian Aboriginal language! For a long time, people believed that koalas get all the moisture they need from juicy leaves. In fact, these pouched mammals do drink, especially when it’s very hot and dry.

Let’s get our weird facts about koalas straight: It’s not true that they get drunk on leaves! These tubby teds need to rest as much as possible because they get so little energy from their food. They’re only awake for four hours a day and spend nearly all that time eating. To limit how much they move, koalas try to eat and sleep in the same tree. They’re also nocturnal, so they’re awake at night. 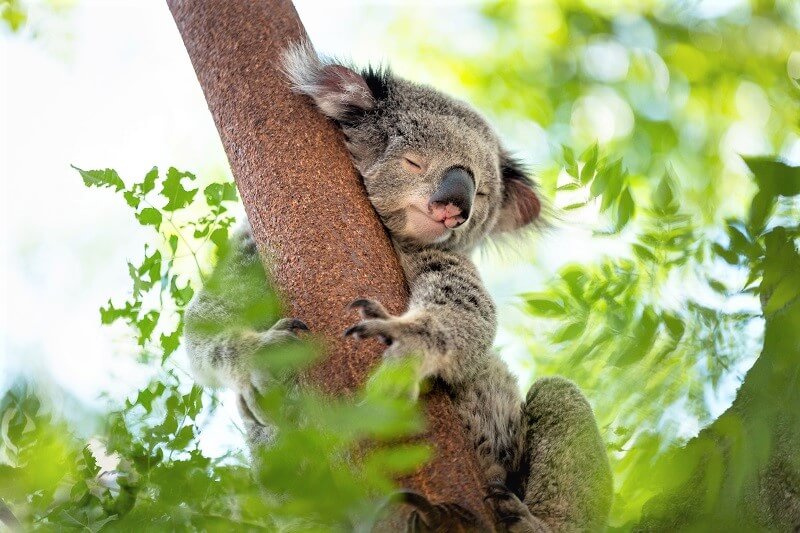 After a pregnancy of 35 days, the baby koala, also called a joey, is born. It’s the size of a jellybean, with no ears, eyes, or hair. Using its strong front legs and guided by its senses of smell and touch, the baby must crawl into its mother’s pouch all by itself. What a trek! Here it stays for 6-7 months, securely attached to a nipple, suckling milk.

Before it can tolerate gum leaves, the joey eats a soft porridge called “pap”. This contains the mother’s droppings so she can pass her special microorganisms on to the baby. In this way, the joey’s body learns how to digest gum leaves. It feeds on pap for a few weeks before emerging from the pouch. Joeys usually leave their mothers when they’re 18 months old. 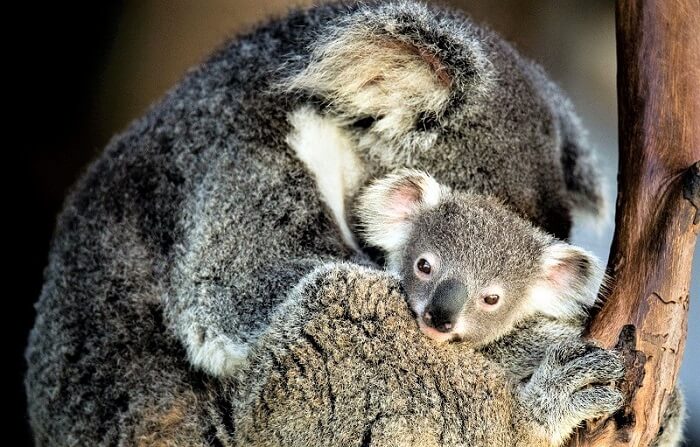 How do you know if you’re looking at a male koala? A mature male has a dark scent gland in the centre of his white chest. This produces a sticky substance that he rubs on trees to mark his territory. It’s like writing your name on your bedroom door.

These furry Ozzies are lucky to have few predators. Dingoes and large pythons sometimes enjoy a koala snack and birds of prey, like owls and wedge-tailed eagles, try to snatch young koalas.

Koalas have five finger-like digits on each front paw. Two of these are “opposed”, which means they are situated apart from the others (like our thumbs). This helps them hold firmly onto branches and food. Two digits on the hind paws are fused together to form a claw for grooming. It’s like a built-in hairbrush! 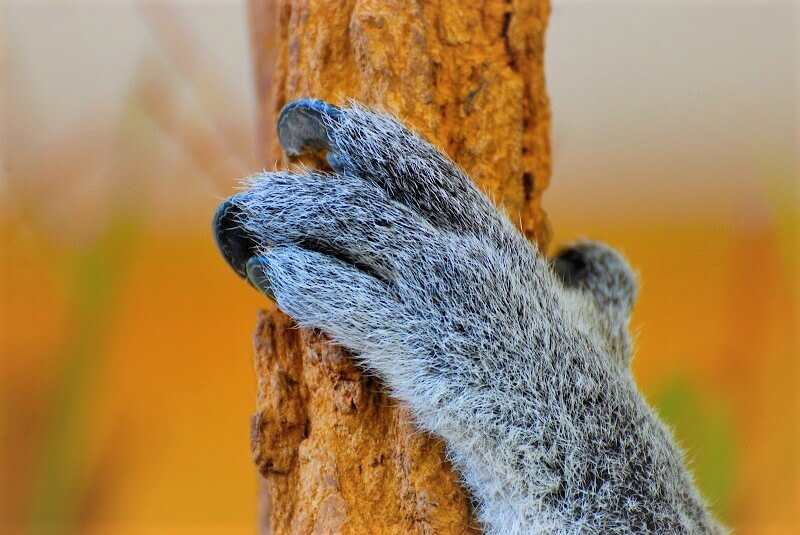 These magnificent marsupials have fingerprints that are almost identical to human ones! Crime-prone koala bears could leave prints all over the scene of a crime… but nobody ever suspects a koala!

12 What noises do koalas make?

Here’s another interesting fact about koalas: They’re not as quiet as you might think and make a range of noises. The loudest is a sound like a loud snore and then a belch, known as a “bellow”. Click here to listen to a koala bellow! Why not try and bellow like a koala yourself?

Males lead more dangerous lives — they’re injured in fights and often travel longer distances. In the wild, in undamaged habitat, koalas can live as long as ten years. Old koala’s teeth are ground down from years of chewing tough leaves, so they sometimes struggle to eat properly.

14 These famous Australians are losing their homes!

Tragically, Australia has one of the fastest rates of environmental destruction worldwide. Over 80% of koala habitat has already vanished! With their trees gone, koalas have nowhere safe to live. They spend more time on the ground searching for food and shelter. Here they are easily killed, injured, or fall ill with stress related disease. 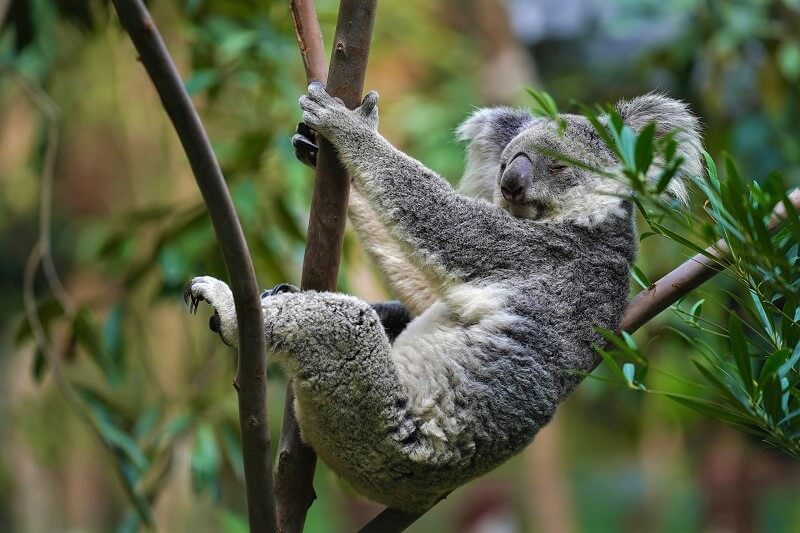 15 Their numbers are falling

Every year there are fewer koalas in the wild, due to deforestation and disease. Australia has also been ravaged by bushfires which destroy the koala’s habitat. Nearly 3 billion animals, including thousands of koalas, also perished in the blazes. These beloved Australians are being pushed to extinction. Find out here what you can do to help koalas push back!

If you love animals, try fingerpainting your favourites and be inspired by other fun activities you can do at home. For a monthly dose of crafting fun, get a craft-stashed toucanBox, plus educational magazine and sticker sheet, for just £5.95!