15 facts about spiders for curious children and grown-ups

Spiders are weirdly wonderful. They have eight eyes, huge (sometimes poisonous) fangs and big jaws! But are spiders really scary, spooky or dangerous? We’ve made a list of amazing facts to teach you all about these strange but stupendous creatures. Let’s discover whether they’re as scary as they sometimes seem…

1 Not all spiders spin webs

All spiders can spin silk using spinnerets on their abdomen, but not all spiders use webs to catch food. There are 11 different kinds of spider silk, and many spiders can make five or six types. Some use it to make traps in small holes, others to make sleeping sacs, and all spiders make drop lines (which look a bit like bungee jumping ropes). Spider silk is amazingly strong — stronger than any other man-made or natural fibre on earth!

2 Spiders have been spinning webs for 100 million years!

These awesome arachnids hunt their prey in many different ways. Flower Spiders hide in flowers and lie in wait for insects. Wolf Spiders dig deep burrows with a sneaky trap door to catch insects. Yellow Sac Spiders chase their prey and can run up to 2 miles per hour on those tiny legs! The Cardinal or Fen Raft Spider even hunts by walking on water. 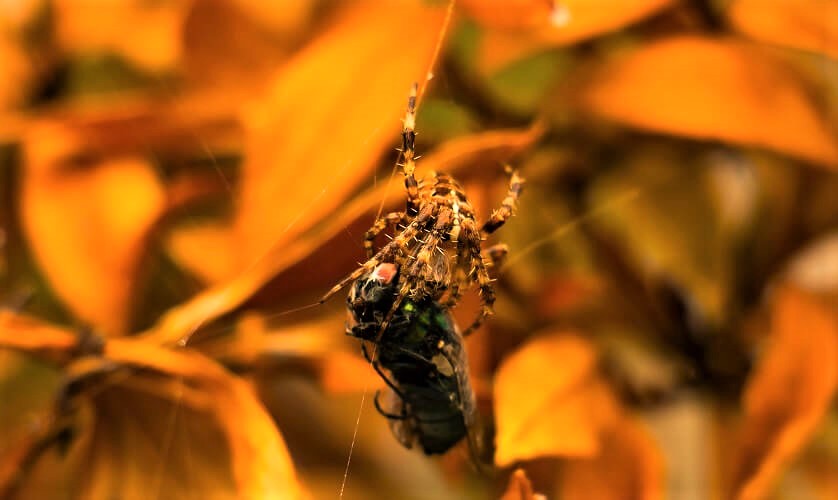 4 There are 25 tons of spiders living on Earth

There are more than 47,000 species of spider worldwide, 670 of which are found in Britain. All together they eat between 400 and 800 tons of insects a year! Small spiders like the Woodlouse Spider eat insects. The biggest spider in the world is the Goliath Bird-Eater Spider. As their name suggests, they feeds on birds, but also enjoys a mouse snack.

Many species of spider use dances to intimidate rivals and warn them off their territory, usually by waving their pincers in the air. But Regal Jumping Spiders also have an elaborate courtship dance to attract a mate. Some spiders even like to sing! Male Huntsman Spiders make a buzzing sound to serenade lady spiders. Can you make a buzzing spider song? For other fun things to try at home, try these home-based activities.

In Bengal, small spiders are thrown as confetti (although they probably don’t enjoy it!). In Egypt, spiders are placed in newlyweds’ beds for good fortune. Finding a money spider on your clothes is considered lucky all around the world.

7 Some spiders are REALLY hairy!

Tarantulas, one of the biggest types of spider, can pull the short, bristled hairs out of their abdomens and use them as weapons. These hairs are short, sticky and very painful if they touch your skin or eyes. Some people have Tarantulas as pets, although this is not necessarily good for the spider. Instead, consider adopting a Tarantula or other spider that can happily live its life in the wild.

8 There is a special name for fear of spiders

Although very few spiders can hurt you, and most only eat insects, many people are afraid of spiders. This is called arachnophobia and comes from the Greek words for “spider” and “fear”. If you’re afraid of spiders then check out our bookshop and grab a copy of “Spiders!”, an exciting story about how misunderstood these little creatures are!

7 Some spiders are critically endangered

One of the rarest and most beautiful spiders in the world is the Peacock Parachute Spider. Because of its gorgeous blue colour, it’s also known as the Gooty Sapphire. It’s found in only one place in the world: a single patch of forest near Gooty, in West Bengal, India. Sadly, its survival is at risk because of tree felling.

Although they have eight eyes, most spiders have poor eyesight. Instead, they rely on their incredible hearing, taste and smell. They use the hairs on their legs like an extra pair of ears, to pick up vibrations and understand how close or far away an object is. Spiders use scent and taste to communicate with other spiders. A male Black Widow can even tell if a female Black Widow is hungry by smelling and tasting the chemicals in her web!

11 Some arachnids are dangerous

The most dangerous spiders to humans are the Goliath Bird-Eater, the Brazilian Wandering, and Banana Spider. Some types of Black Widow Spider have a very toxic venom, and much bigger fangs and venom sacs than other spiders. Although some (but VERY FEW) spiders can be harmful to humans, they feed on insects, rodents, lizards, and small birds, NOT people.

Despite their fearsome venom, large fangs and powerful jaws, spiders use enzymes to help liquefy their food before they eat it. That’s also true of Camel Spiders, who have jaws that are one-third of their body length. Spiders use their fangs to bite and paralyse their prey and then pulp them with a chopping or sawing motion, rather than chewing or biting.

13 There is a vegetarian species

Meet the Bagheera kiplingi Jumping Spider, which lives in central America and Mexico. This cute spider feeds only on the leaf tips and nectar of the Acacia tree. It also builds nests in the thorns of the tree, so a snack is always close by!

Spiders spin sacs of silk to house their eggs, but many female spiders will die before their young hatch. Some species guard their eggs and young. Many baby spiders are born independent but some, like the baby Wolf Spiders, are carried on the mother’s back until they can look after themselves.

15 A few arachnids have social networks

Most of these creepy crawlies prefer to live and hunt alone, but social spiders live in large colonies and work together to weave webs which they share to catch their prey. Spiders of this type are called quasi-social. They share tasks such as cleaning and mending their webs. Working together, they can spin much bigger webs over seven metres wide. Only 23 out of more than 45,000 spider species are sociable, so be sure to let spiders enjoy their space.

Are you mini-beast mad? If you love all things that scuttle, crawl and creep then you’ll love making our tie-dye butterfly! Or, if you love nature and getting your hands dirty, build your very own mini greenhouse! Add both crafts to your toucanBox, plus an educational magazine and sticker sheet, for just £5.95!

Images ⓒ unsplash.com:
Spiderweb on Plant by freestocks
Orb-Weaver Spider Feasting on a Fly by Ryan Hyde
Huntsman Spider on a Leaf at the Forest Garden of Amboli by Sonika Agarwal
Tarantula by Elena Taranenko
Up close and Personal by v2osk
Spider Nest Hatching by Robert Thiemann