Turtles are absolutely amazing creatures. Did you know that sea turtles can hold their breath for five hours and some swim nearly a marathon every day? You may just wonder, is there anything they can’t do? Well, yes… if they’re an ocean turtle they can’t retract into their shell! Read on for other fascinating turtle facts and discover a turtle that looks like an alligator.

1 Turtle or tortoise? Look at their feet!

Biologists say: “They’re all turtles!”. ‘Turtle’ is the umbrella term for all 200 types of turtles, tortoises, and terrapins. Turtles are great swimmers. Aquatic turtles, like musk turtles, have webbed feet and live in lakes and swampy ponds. Marine (sea) turtles are found in oceans and have flippers.

Tortoises live on land and have feet like a little elephant. Tortoises can’t swim and are popular pets, especially the Hermann’s tortoise and Horsefield tortoise. 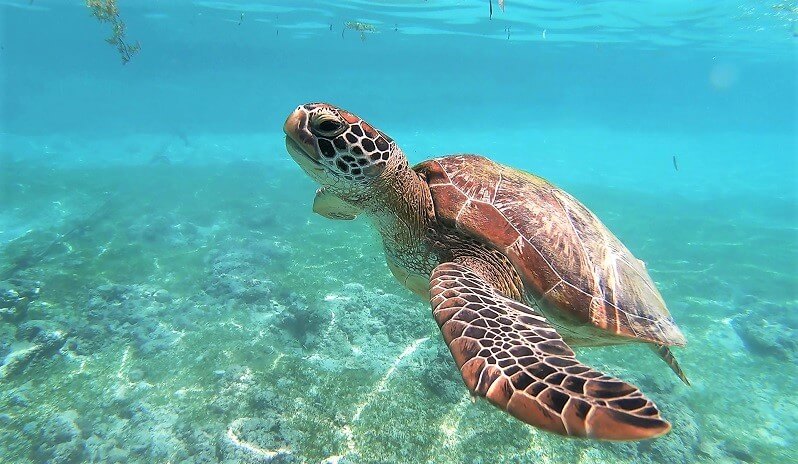 2 They wear their bones on the outside

A turtle shell is not a single piece but made of over 50 bones fused together. They wear most of their bones on the outside! The top part of the shell is called the carapace and the underside is a plastron. Both sides are joined by a bridge. All marine and aquatic turtle bones are spongy and light, to help them float.

Like other reptiles, turtles are cold-blooded. This means that their body temperature changes based on how warm or cold it is outside. They live in many different habitats across the world, including coral reefs, seagrass beds and mangrove swamps.

4 They’re all different shapes and sizes

The Kemp’s ridley is around 70 cm long and weighs up to 40 kilos, making it the smallest turtle. It appears tiny when compared to the leatherback, which can reach up to 180 cm and weighs 250 – 700 kilos. Amazingly, Wales holds the world record for the largest marine turtle ever found: In 1988 a leatherback turtle came ashore measuring 2.5 metres and weighing over 900 kilos! 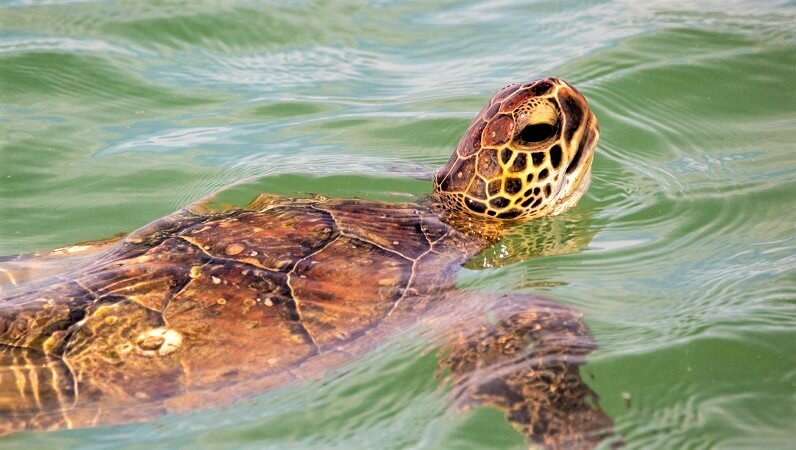 Marine turtles can migrate incredibly long distances. The longest known swim is for a female leatherback turtle. She covered nearly 21,000 kilometres over 647 days from Indonesia to the west coast of America. That’s over 30 kilometres a day!

6 Leatherbacks really do have ‘leather’ backs

Leatherback turtles are named after their unusual shell, which is leather-like rather than hard. This cute turtle has four broad flippers, a triangular head and a barrel-shaped body covered with a large, black, speckled shell.

A turtle uses its beak-like mouth to grasp food. This beak is made of keratin, the same stuff your fingernails are made of. Hatchlings are often omnivores, so they eat animals and plants. Green turtles are vegetarian and prefer sea grasses, sea weeds, and algae. Most other turtles snack on fish, molluscs, and squids. Leatherbacks love eating jellyfish on their long sea voyages.

9 There is a dinosaur of the turtle world

It looks like a turtle dressed up as a dinosaur and lives in North America. The scary-looking alligator snapping turtle is one of the largest freshwater turtles in the world. It has a spiked shell and thick, scaled tail and is anything but picky with its food. It eats vegetation, fish, small mammals, and even other turtles!

The common snapping turtle lives in freshwater and loves wallowing in the muddy bottom of streams. Yes, it does bite, but there’s no need to worry if you leave it alone. However, if you come too close, it might just give you a nip! It munches on snakes, birds, frogs, small mammals. 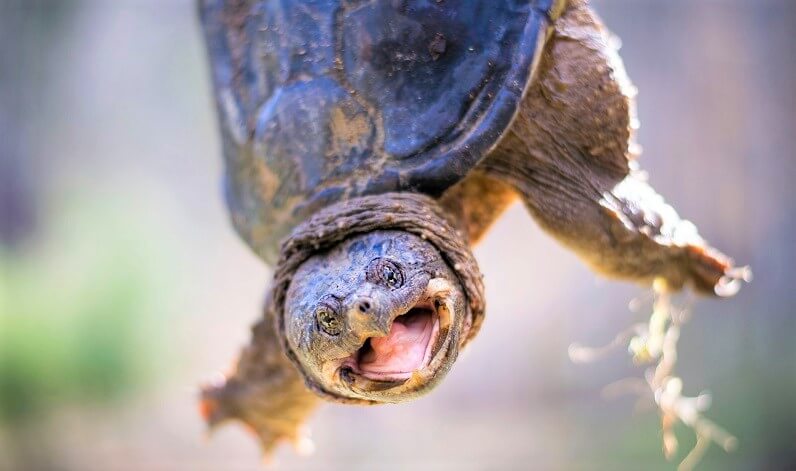 11 The Hawaiian honu turtle is a symbol of good luck

The Hawaiian green sea or honu turtle is the only indigenous reptile in Hawaii and is found nowhere else on earth. Hawaiians believe that the honu is a symbol of good luck and the turtle form of a guardian spirit, or Amakua. Hawaiian legend tells of a large honu, called Kauila, who would transform into a human girl and protect children.

Loggerhead turtles are named after their large heads that support strong jaw muscles. Clams and sea urchins beware! These powerful jaws crush hard-shelled prey as easily as if they were munching on biscuits. Lucky for loggerhead turtles, they are less likely to be hunted for their meat than other turtles. Watch this live cam of rescued loggerheads.

Sea turtles live to about 50 years old, while their freshwater cousins reach 30 – 40 years. Tortoises are the kings of old age and can live to over 100 years! The world's oldest tortoise, according to Guinness World Records, is Tu'i Malila, who lived until the age of 189. Bear this in mind if you want to keep a tortoise or turtle pet! Will your great grandchildren want them just as much as you do?

14 Marine turtles have an amazing sense of direction

Male sea turtles never leave the sea but females occasionally visit the beach. When it’s time to lay their eggs, females return to the same beach they hatched on! Here they bury their eggs in sandy nests. Scientists think that their amazing ability to navigate comes from their sensitivity to the earth's magnetic fields. 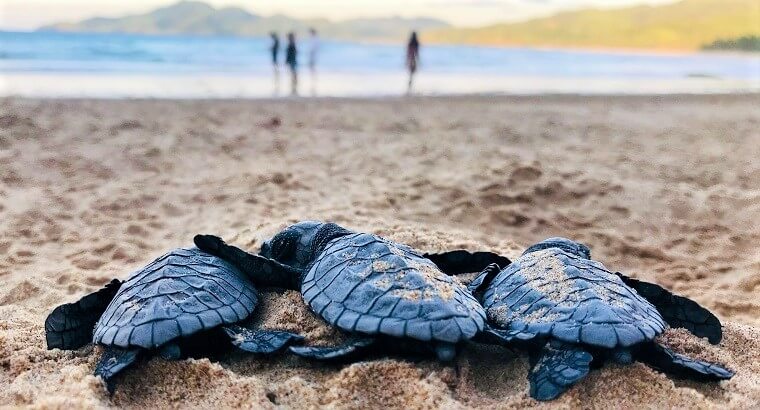 Marine turtles are particularly at risk of extinction. Only one in around 1,000 babies survive. Many turtle adults and babies are caught in fishing nests and many others mistake plastic for jellyfish and eat it. Here are 10 ways you can help save the oceans and the beautiful animals that live in them.

Shell-elebrate these super cool creatures by making your own Galapagos tortoise. Or give these racing jellyfish a go. Add both to your toucanBox for just £5.95! You’ll also get an educational magazine and sticker sheet.