The traditional story of Saint Nicholas for Kids 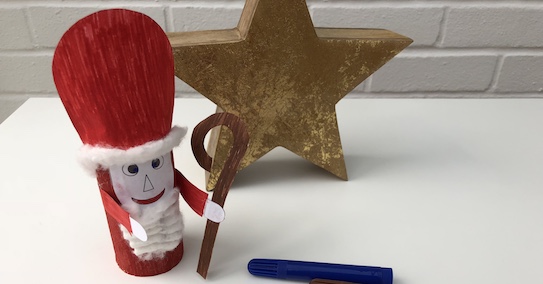 In the run up to Christmas it’s fun to learn about some of the Christmas traditions across the world, especially ones that have influenced some of the classic Christmas stories we share with our kids. Read all about the story of jolly old Saint Nicholas and make a simple Saint Nicholas craft out of recyclable items!

What’s the difference between Saint Nicholas and Santa Claus?

What do you call the man who brings presents at Christmas? He goes by many different names depending on your preference and location! Whether you call him Saint Nick, Kris Kringle, Santa Claus or Father Christmas, one thing is for certain, kids love him!

But did you know that Saint Nicholas isn’t just another name for the sleigh riding, chimney sliding, gift giving Santa Claus? Saint Nicholas actually has his very own story that’s separate from the reindeer driving, mince pie gobbling Santa Claus that you might be better acquainted with.

The traditional story of Saint Nicholas for Kids

Saint Nicholas was born in Lycia (modern day Turkey) in the fourth century AD and went on to become the bishop of a town called Myra (that’s why he’s sometimes referred to as Saint Nicholas of Myra). Saint Nicholas was a kind man, known for his good deeds and selfless acts of charity. He helped families most in need and became the patron saint of children.

Saint Nicholas may not have had a toy workshop run by elves or a reindeer with a particularly shiny nose, but he was just as beloved as Santa and just as generous too!

Saint Nicholas’ feast day is on the 6th December. On the morning of 6th December well behaved children will wake up to find their once-empty (and newly-polished) shoes filled with treats left by Saint Nicholas! This tradition is upheld in many countries to this day…

How is Saint Nicholas celebrated?

On the night of 5th December it is said that Saint Nicholas will fill good children’s shoes with toys and gifts. Kids spend the evening polishing their boots in the hope that Saint Nicholas will fill them with treats! Leaving out an empty, muddy welly won’t do the trick for Saint Nick, he leaves any muddy shoes empty. So, it’s best to polish those shoes thoroughly to improve your chances…

On the night of 5th December children who believe in the Saint Nicholas story across Germany, Austria and Poland (and many other places too!) will place one of their newly polished shoes - usually a walking shoe or a wellington boot - in front of their bedroom door or near the front door of their house for Saint Nicholas to come and fill. Some children may also leave some cookies, nuts or raisins for Saint Nicholas as a thank you for coming to their house.

If those children are lucky, on the morning of the 6th of December they might wake to find that their shoes have been filled with treats left by Saint Nicholas!

(For those of us who don’t celebrate Saint Nicholas this all might seem pretty unusual! But let’s not forget that we have to leave out a carrot for flying reindeer, and a rabbit leaves us chocolate eggs once a year).

What do the kids have to do to get treats from Saint Nicholas?

Simply cleaning your boots isn’t enough! Saint Nicholas has magical eyes and watches you and your behaviour for a long time, so make sure you are always behaving at your best.

Even if you are not from a country that celebrates Saint Nicholas, the tradition and story of St. Nicholas fascinates kids around the globe. So why not download our free St. Nicholas template and try out some new Christmas traditions at your house?

1 Cut out the template. Paint the toilet roll and clothes red. Colour in the rest of the pieces. Leave the pieces to dry.

3 Glue the hat over the head and around the toilet roll.

4 Use cotton wool to add hair and a beard.

5 Glue the stick into the hand. Add the arms to the toilet roll tube. 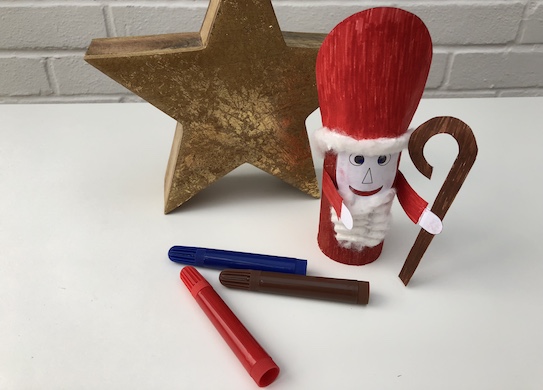 Read up on these pointers to find out how to get the Saint Nicholas resemblance just right!

Saint Nick wears a red robe, a big red bishop’s hat and fashions a gigantic white, curly beard. A remarkable characteristic, and one that seems to be pretty popular this time of year. To differentiate him with Santa Claus, his hat is slightly different and he carries a staff (a ‘crozier’). If you’d like to turn your Saint Nicholas craft into Santa Claus, you can always reshape his hat!

Some tales suggest that he travels around on foot, which is a lot of ground to cover over one night! Others say he has a magical horse. My family used to mix traditions and think that he too had a magical sleigh and some reindeer buddies. Much like the children in the Netherlands do, we used to put a carrot snack in our shoes on the evening of the 5th. When we woke up in the morning the carrot would have been gobbled up, and in its place a yummy candy cane. Which isn’t a bad trade-off at all.

In some European regions Saint Nicholas would deliver the treats personally to the children. This can be such an exciting event at nursery or school! In other regions he only secretly stops by during the night. He’s there to see if children have been naughty or nice, because Father Christmas has quite a lot on his plate as it is. He’ll scribble down all the nice names and pass them onto the big man. And the naughty children? Well, that’s another story.

So how will you spend the evening before Saint Nicholas day?

A little treat in return for a pair of spotless shoes? That doesn’t sound like a bad deal at all… We are wondering whether Saint Nick would appreciate a little gift from the little one? We have a lovely Christmas card colouring in template where your little ones can get creative with drawing and writing to St Nick.