With super long necks, strange tongues and horns that aren’t officially horns, giraffes look more like aliens than African animals! We’ve packed in 15 weird and wonderful facts about giraffes, including how they’ve inspired space travel, why male giraffes might get headaches and why a giraffe baby lands with a bump.

1 There are different giraffe species

For a long time, scientists argued about how many types of giraffes there are. They decided on four species. Meet:

One of the most important facts about giraffes to remember: They all live in Africa - in different parts of Africa though. Northern giraffes call north Africa home, Southern giraffes stroll around the south of the continent, the other two species are happiest in the east.

2 Their patches tell them apart

No two giraffes have the same pattern. Their patchwork coats also vary depending on their species. The Masai giraffe is darker with brown lines between its patches. The Reticulated giraffe has brown-orange patches separated by thick white lines. The patches of the Northern and Southern giraffes are more like splodges of paint. Watch giraffes stroll around on this live cam. Can you tell which species they are? Sometimes they’re hiding - check back later if they are! 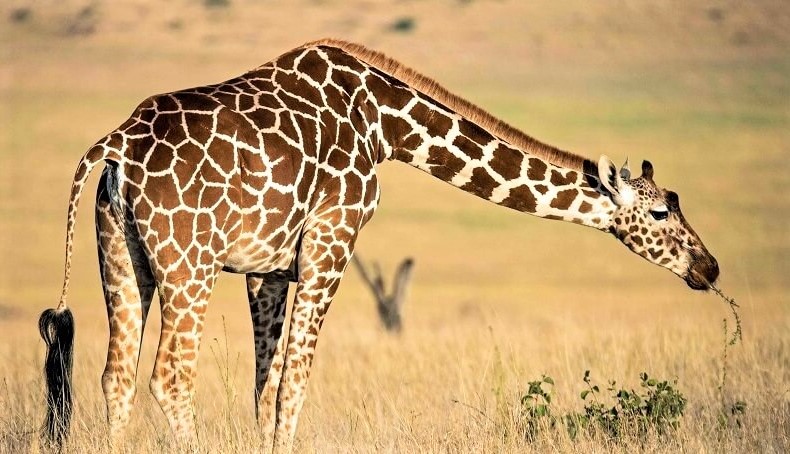 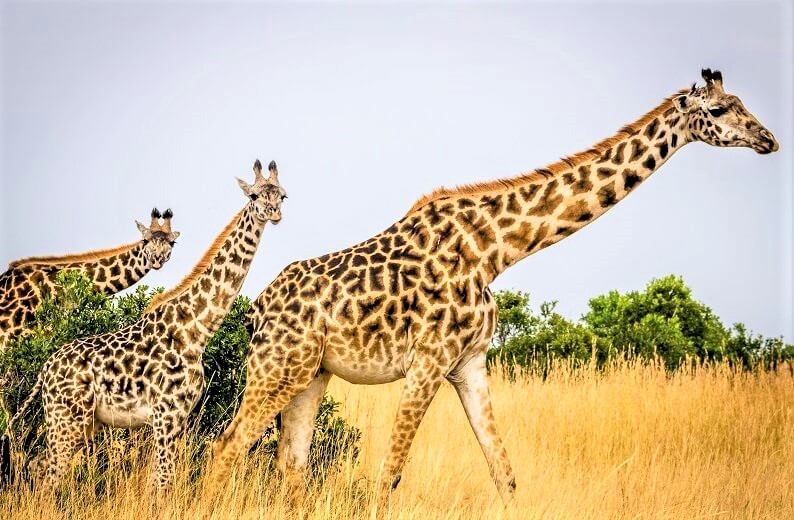 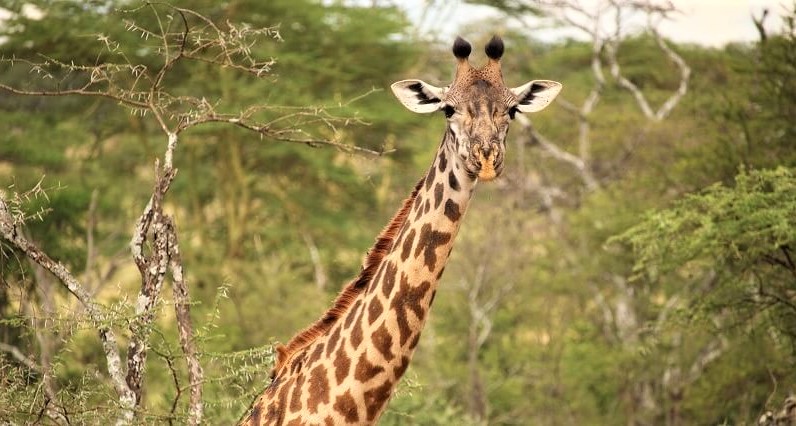 Giraffes are the tallest land animals on planet Earth (If you want to learn more about our planet and others in the solar system, check out our superb planets activities page!). Fully grown giraffes stand at 4.3 – 5.7 metres tall. That’s taller than three men standing on each other’s shoulders! Baby giraffes might look tiny compared to their mums, but they’re as tall as the average man when they’re born.

What does the habitat of the giraffe have to do with its neck? Well, they use their long necks to help keep a lookout for predators. Their eyes are higher up and so better able to spot any approaching predators on the wide, open grasslands. Prowling predators can easily disguise themselves in thick forests, so the flat land is better for giraffes.

Giraffes spend most of their time eating and can guzzle up to 45kg of leaves and twigs a day! They also snack on fruit and grass. Thanks to their long necks and legs, giraffes can reach tasty treats like fresh green leaves in tall trees.

6 They don’t drink much

Giraffe necks are too short to reach the ground, so they awkwardly spread their legs or kneel to reach the water. They’re an easy target for predators when they’re drinking so it’s a relief for a giraffe that it doesn’t need to drink very much! Giraffes get most of their water from their leafy meals so they only need to drink every few days.

7 A giraffe uses its head for fighting

Male giraffes (called bulls) swing their long necks and butt heads to see who is stronger. This is known as “necking“ and most giraffes don’t get hurt doing it. Eventually one male will give up and walk away, probably to eat.

Giraffes prove that you can be super tall and super fast! They reach speeds of up to 60km/h over short distances. Predators beware! Giraffe kicks are powerful and their hooves are the size of dinner plates.

With their big eyes, long eyelashes and two tufty little horns, giraffe faces are pretty funny looking. Both male and female giraffes have two ossicones. These look like giraffe horns but are actually cartilage covered with skin. Female ossicones are thinner with cute, fluffy tufts. Male giraffes have thicker ossicones that go bald on top, due to wear and tear from giraffe fights. 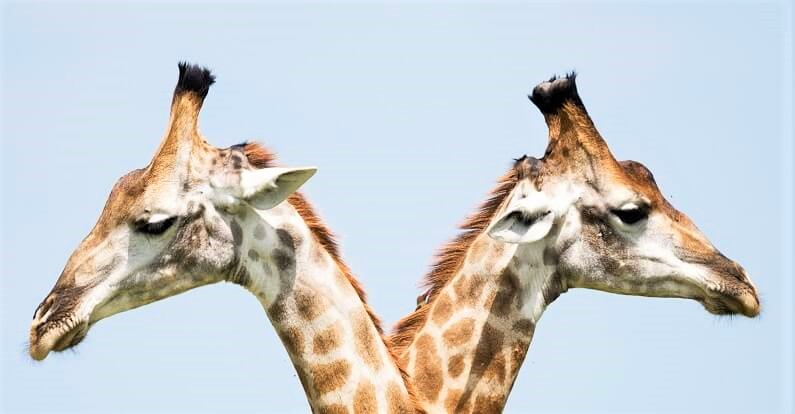 Can you try and guess the colour of a giraffe tongue? It’s dark blue! Giraffes stick their tongues out so much when they’re grazing that a pink tongue would get sunburnt. Darker colours offer better protection in the harsh African sun.

A giraffe’s tongue is 45-50 cm long and “prehensile”, which means it can twist and grip things. This is very useful if you’re trying to pick delicious leaves out from thorns. Giraffes also have mouth armour! Their mouth is covered in hard, finger-like papillae to protect it from sharp thorns. 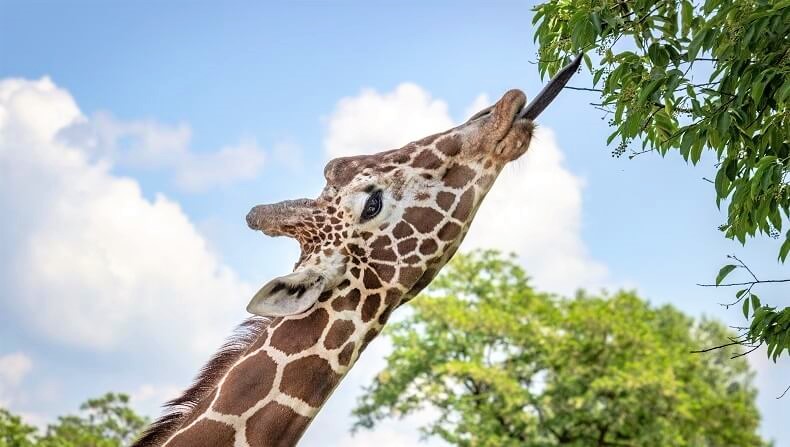 12 They have huge hearts

A giraffe heart weighs around 11 kilograms and is the biggest heart of any land animal! It needs to be extra powerful to pump 60 litres of blood around the giraffe’s body and all the way up that long neck.

13 A giraffe baby is tough!

Giraffes give birth standing up and the giraffe baby falls nearly 2 metres to the ground. It’s ossicones lie flat against its head at birth to avoid hurting the mother. The calf stays with its mother for 1½ years. If you fancy making your own giraffe baby, try out our salt dough activity. 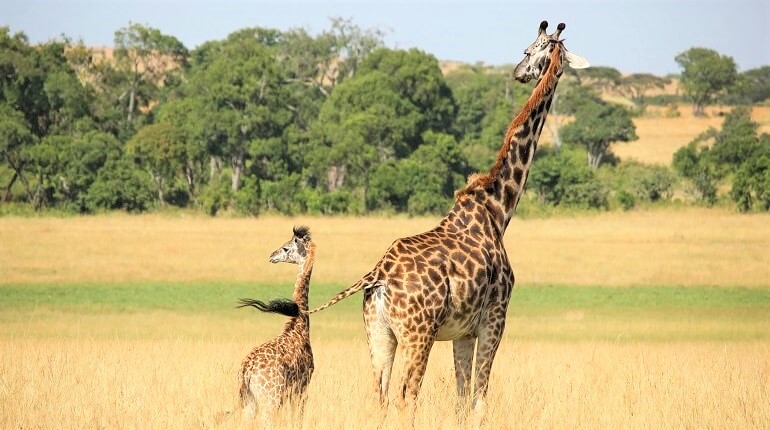 Astronauts have a problem in space. Due to weightlessness, their leg veins get weaker because their heart doesn’t have to work as hard to pump blood. When it’s born, a baby giraffe’s legs rapidly inflate with blood. So it goes from floating in mum’s tum to walking on strong “land” legs in under one hour. NASA used the design of blood vessels in giraffe legs for its space suits. Sadly, they don’t seem to have paid tribute to the giraffes by using a giraffe print on the suits.

15 They may become extinct

Giraffes need our help! Their numbers have dropped by 30% over the last 30 years. The remaining herds face terrible threats from hunting and habitat loss. Their homes are turned into farms and the trees they eat are chopped down. Look here to find out what we need to do to save these magnificent giants.

Love giraffes? Add the Giraffe Spy Periscope to your toucanBox. It comes with an educational magazine and sticker sheet, for just £5.95!